As politicians file in and out of smoke-filled rooms today in a desperate attempt to avoid becoming fiscal cliff divers, Lindsay Graham, Senator from South Carolina who these days passes as a moderate Republican, has been tweeting about his opposition to gun control:

The assault weapons ban didn't work then. It's not going to work now. I will oppose it.

You're NOT going to be able to stop mass murderers with no criminal record just by taking my AR-15.....

Gun sales are UP and crime is DOWN. It's a false sense of security gun control advocates are pursuing here.

Graham is laying down the familiar platitudes in the school of practical opposition to gun control that erroneously leads so many gun-rights advocates to dismiss gun control as implausible. And if legislative or constitutional alternatives for addressing America's epidemic of gun violence will not work, there is only one intellectual path left to take, to investigate the peculiar nature of American identity that has given rise to this scourge. Alex Massie, whose thoughts on Newtown I have I linked to previously, spends the better part of his essay speculating on just this issue:


And so our loop returns to the initial, unanswerable question why? These horrors happen in other countries too – Germany, Finland, even Britain – but they unquestionably happen more frequently in the United States than elsewhere. And they do so even when you control for the number of households which contain a gun (which is not quite the same measurement as guns per capita).

So why? What is it about America that makes it different?

For those on the other end of the political spectrum, this pathology in American identity is just as engrossing. Filmmaker Michael Moore's "Bowling For Columbine" pursues this question, and the film is all the more compelling (unlike many of his other films) for its uncertainty in finding a cause to American gun violence.

On the conservative side the answer always lies in the sacred heritage of individualism, the wellspring of American culture. Massie takes this traditional line with an added twist that "variance coupled with individualism" has produced America as we know it, "a country of magnificent wonders and jaw-dropping failures. Its highs are very high and its lows exceptionally low. This, if you like, is a feature, cause and consequence of American exceptionalism." To drastically restrict these values is not only likely impossible, but undesirable: "the frontier – or the idea of it – must forever remain open. Because if it – or the idea of it – closes then a part of the American idea is also closed."

Sheyda Jahanbani writes that it is exactly this right-wing fixation with the memory of the frontier and the dogma of individualism that might defeat substantive gun control:


Perhaps nothing will change because heartbreak and astonishment and outrage aren’t enough to uproot the deep ideological commitment Americans have to the image of the rugged individualist, the mythopoetic hero of a frontier never-land, the hero-loner. Perhaps, as a society, we are too beguiled by the illusion of that solitary figure’s place in our history to embrace collective action, to place our individual trust in the public institutions that we have built to protect our families and communities, to see beyond the mirage of a radical, “self-sufficient” past, and fortify the bonds of our complex civil society today. Perhaps we are living in the thrall of a yesterday that never was.

The frontier has been the concern of Americanists ever since Frederick Jackson Turner gave an address to the American Historical Association in 1893 called "The Significance of the Frontier in American History." 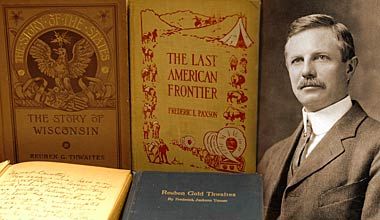 Turner's purpose was, in essence, to sound the alarm over the disturbing revelation in the 1890 census that the western frontier was no longer in existence. With its disappearance went the defining force in the shaping of American identity.

Thus American development has exhibited not merely advance along a single line, but a return to primitive conditions on a continually advancing frontier line, and a new development for that area. American social development has been continually beginning over again on the frontier. This perennial rebirth, this fluidity of American life, this expansion westward with its new opportunities, its continuous touch with the simplicity of primitive society, furnish the forces dominating American character.

Turner's thesis has maintained its relevance through the decades in spite of gutting critiques from many other historians, notably Patricia Limerick, and with good cause. In celebrating individualism on the frontier, Turner missed the mass of evidence that suggested other factors, more significant factors, were at work in the settlement of the West: the role of government, the role of non-whites (for many of whom the West was not actually west of where they originated), the role of corporations, and the role of cities. Still, there is wisdom in Turner's work that has stood the test of time. He offered this warning that speaks as well to 2012 as it did to the 1890s:


So long as free land exists, the opportunity for a competency exists, and economic power secures political power. But the democracy born of free land, strong in selfishness and individualism, intolerant of administrative experience and education, and pressing individual liberty beyond its proper bounds, has its dangers as well as its benefits. Individualism in America has allowed a laxity in regard to governmental affairs which has rendered possible the spoils system and all the manifest evils that follow from the lack of a highly developed civic spirit. In this connection may be noted also the influence of frontier conditions in permitting lax business honor, inflated paper currency and wild-cat banking.

Nor did Turner neglect altogether the significance of Union and the individual acceptance of sacrifice, even sacrifice of cherished liberty, in the enterprise of civic belonging.


It is not strange that in all this flux and freedom and novelty and vast spaces, the pioneer did not sufficiently consider the need of disciplined devotion to the government which he himself created and operated. But the name of Lincoln and the response of the pioneer to the duties of the Civil War,--to the sacrifices and the restraints on freedom which it entailed under his presidency, reminds us that they knew how to take part in a common cause, even while they knew that war's conditions were destructive of many of the things for which they worked....

Pioneer democracy has had to learn lessons by experience: the lesson that government on principles of free democracy can accomplish many things which the men of the middle of the nineteenth century did not realize were even possible. They have had to sacrifice something of their passion for individual unrestraint.

In all these discussions of individualism, especially in the horrific response to Newtown by Wayne LaPierre and other NRA leaders, it is that notion of civic obligation that seems missing. Gun-control proponents have already made their sacrifice: we have given up our safety and the safety of the children around us. What, going forward, are gun-rights advocates willing to sacrifice?
Posted by Unknown at 3:30 PM