Shapers of the Earth

It has already been widely reported that 2012 was the hottest year on record for the continental United States and, unless a major volcanic eruption occurs, 2013 looks to be even hotter. The global climate has been suffering as well. As I reported in my last post, Australia is currently locked in one of the worst heat waves in history with temperatures in areas of NSW approaching 50 degrees Celsius (122 degress F.). As the New York Times reports, extreme weather is occurring everywhere. In the northern latitudes, winter seems to be, from region to region, bizarrely warm or absurdly cold. Siberia is suffering from temperatures approaching 50 degrees (F.) below zero. Perhaps the strangest fact of weather: Jerusalem and other cities in the Middle East have endured more snow this winter than Chicago.

Extreme weather was predicted as one of the dire consequences of climate change by James Hansen in 1988 in testimony before Congress. Hansen argued that global warming would not, as many people inferred, manifest only as gradual ubiquitous rising temperatures; it would instead "load the climate dice," making extreme weather events vastly more common than in our pre-industrial or early industrial climate.

There are all kinds of reasons to be frightened by climate change. A recently released federal report confirms that staggering changes lie ahead and not only are we failing to mitigate the problem and slow the change, we aren't well prepared to deal with a much warmer world. Probably the scariest data comes from the arctic, where swiftly rising temperatures are causing the permafrost to melt, releasing huge deposits of methane. As greenhouse gases go, methane is more potent than carbon dioxide by a factor of 20 (at least).

It is easy, then, to succumb to apocalyptic visions of climate catastrophe and the demise of human civilization. It is disconcerting that a whole bunch of smart people believe such a fate is possible, even likely. Malthusians Paul and Anna Erlich, for instance, see a collapse of global civilization ahead.

All of which begs the question, do we have any reasons for optimism? The answer is, I think, yes... quite a few.

Humanity is not without options when it comes to global warming. By that, I do not mean to parrot the refrain of most environmentalists that we must drastically limit our carbon emissions. We should drastically reduce our carbon emissions, but to this point little evidence exists that we have the will to do so. For instance, despite all the media attention given to renewable energies, coal use is rising globally thanks to India and China. For the foreseeable future, humanity will continue to put carbon dioxide and other greenhouse gases into the atmosphere.

But there are artificial ways of cooling the earth and some scientists have pointed to a variety of geoengineering methods as failsafes in case a climate emergency calls for their implementation. One school of geoengineering ideas concerns solar radiation management (SRM), which basically means figuring out ways to reflect more sunlight back into space and thus reduce global temperatures. Some of these ideas are so futuristic as to sound wacky (like sending mirrors into space) but David Keith, a Harvard professor, has articulated the most realistic method of SRM geoengineering: mimicking the effects of a volcanic eruption. Big volcanoes, when they erupt, send tons of sulfur dioxide into the atmosphere and all these particles of sulfur dioxide reflect sunlight away from the earth, reproducing on a molecular scale the albedo effect. This isn't conjecture... scientists know how this works. Consider this graph of global temperatures after Mt. Pinatubo erupted in 1991: 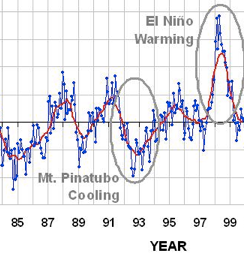 Because of the eruption, global temperatures dropped by .5 degrees Celsius for the next two years. Other major eruptions in the last century have produced similar measurable effects. Climate cooling, then, could be achieved by sending planes into the upper atmosphere releasing payloads of reflective particles. Compared with de-carbonizing our economy, this is a really bad way of dealing with climate change. It reduces precipitation; it does not stop ocean acidification; and it won't permanently hold off the calamity of long term climate change. But it is fast acting, cheap (roughly the cost of a weapons system), and effective. Moreover SRM could be used to on a regional scale to, for instance, keep the Arctic from melting.

Many environmentalists have dismissed geoengineering. It would be a supreme act of hubris, they argue, to imagine that humans should manipulate the earth on such a scale. Moreover, as geoengineers like Keith and others readily admit, technical "fixes" to the climate do not conserve the earth or nature as it was, but create a new paradigm in which we live in a truly anthropocene world.

I do not agree with these environmentalists. First, necessity makes investigations of geoengineering essential. We must study it because it seems almost certain we will have to use it. Second, it is a little late to caution against human hubris. In geological terms, altering the climate in one stroke by deploying sulfur dioxide is not particularly different than spending 150 years pouring carbon dioxide into the atmosphere by burning fossil fuels. Humans have been geoengineering the climate since the Industrial Revolution. It would help to remember that and, as one science fiction writer has observed, to overcome our fears of geoengineering as a weird science.

Deep fear can set it when we look at the environmental future that confronts the globe, especially when we observe the political cowardice, denial, and inaction on this issue that I have written about before. But it is deeply heartening to consider the efforts by scientists, businessmen, conservationists, and humanitarians to tackle this problem. They are creating new forms of energy: not just renewables like wind, tidal, and solar, but enhanced geothermal systems, thorium salt nuclear reactors, and artificial photosynthesis. The Department of Energy has initiated an enormous battery project to develop better energy storage, the secret to a future of renewables. Multiple teams of scientists have made major advances in water desalination. Global population growth is slowing—in fact, we may never get to 9 billion people. Vaclav Smil, environmental economist, reminds us that we have all kinds of choices to make our own future, and that humans are the most adaptable species in the history of the planet. David Keith, in a talk at the Equinox 2030 conference, explains that his greatest fear for his own children remains war, not the end of the earth. And Bjorn Lomborg assures us that there is a safe future for pasta. Phew!

The end of nature, as Bill McKibben described it many years ago, may indeed be our future, but that does not mean the end of humanity. For better or for worse, we are in control of the globe, architects of an earthly garden. How green that garden is will be ours to decide.
Posted by Unknown at 5:58 PM