And the point, I think, is of fundamental importance here is that that history remains relevant.  What Congress did was make a cautious choice in 2006 that given the record before it and given the history, the more prudent course was to maintain the deterrent and constraining effect of Section 5, even given the federalism costs, because, after all, what it protects is a right of fundamental importance that the Constitution gives Congress the express authority to protect through appropriate legislation.

That was Solicitor General Donald Verrilli in the closing remarks of his oral brief before the Supreme Court in Shelby County v. Holder, the case with Section 5 of the Voting Rights Act at stake. The crux of the dispute seems to be simple: Shelby County in Alabama, a county that Justice Sotomayor noted had 240 discriminatory voting laws blocked by Section 5, a county in which the city of Calera redistricted in order to push its only black councilman off the seven-man city council, has demanded that parts of the Voting Rights Act be struck down because such federal oversight is no longer needed.

The consensus seems to be that the five conservative justices agreed with Shelby County for reasons that obviously have nothing to do with facts. Justice Kagan spelled it out pretty clearly for Bert Rein, Shelby County's attorney:

That would have been a more dramatic revelation if 1. it turned out to be true (in fact, his rankings are slightly off) and 2. it mattered in the slightest. Michael Tomasky had the most appropriate response to that: "So what? That's a red herring. Massachusetts has a black governor. I'd like to know what year Roberts thinks Mississippi is going to elect a black governor."

But the real offender was Justice Scalia, whose sympathy for the petitioner, while absolutely expected, was so outrageously nonsensical it apparently brought gasps from the audience:


And this last enactment, not a single vote in the Senate against it. And the House is pretty much the same. Now, I don't think that's attributable to the fact that it is so much clearer now that we need this. I think it is attributable, very likely attributable, to a phenomenon that is called perpetuation of racial entitlement. It's been written about. Whenever a society adopts racial entitlements, it is very difficult to get out of them through the normal political processes.

I don't think there is anything to be gained by any Senator to vote against continuation of this act. And I am fairly confident it will be reenacted in perpetuity unless -- unless a court can say it does not comport with the Constitution. You have to show, when you are treating different States differently, that there's a good reason for it.

There you have it... the Supreme Court has to strike this law down because it is so damn popular, in fact unanimously popular, we can't trust the legislative branch's motives. Here Scalia revealed three insights into his thinking:

It is pretty gross hypocrisy, so egregious that The Economist took him to task. The need to enforce anti-discrimination voting laws is evident, if not so overt as it was in 1965. Charles Blow wants the Voting Rights Act expanded, and with good reason. 2012 was a case study for how states without federal oversight can systematically work and sometimes unintentionally work to disenfranchise its minority citizens.

But that won't happen in the South... because Antonin Scalia has decided we have won the war on racism. Need proof? The same day the oral arguments were heard, a new statue of Rosa Parks was unveiled in the Statuary Hall of the Capitol. 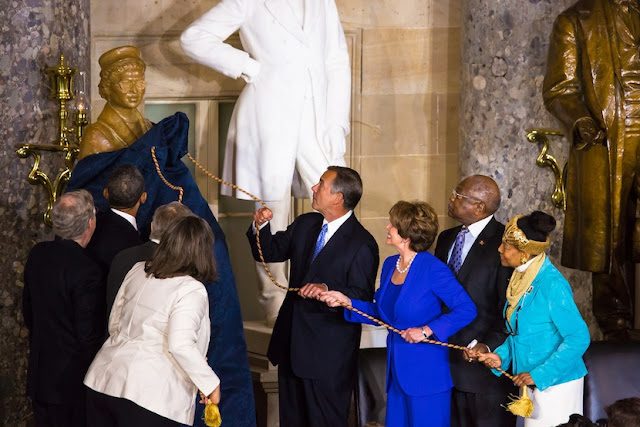