Geoengineering I — Notes on the Science

In earlier posts I have argued that solving the climate crisis is the greatest challenge facing humanity in the 21st century. I have also argued that there are reasons to think humanity is capable of accomplishing this task. If we were to ignore, for a moment, the terrible consequences of climate change on the biosphere and global food production, and instead focus solely on the trajectory of technological and economic progress regarding our energy systems, we might predict with a high degree of confidence a global transition to a low carbon economy. Renewable energy is on the rise. Bloomberg has reported that in some places, renewable energy is already cheaper than burning fossil fuels. In terms of storage, battery technology not only makes renewable energy on an industrial scale much more viable, it makes household scale energy production possible. 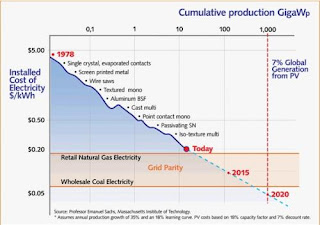 In fact, the growth in technology coupled with dramatic decline in the price of solar panels (see right) has made the decentralization of the energy grid appear likely when twenty years ago it would have been inconceivable.

Given enough time and security, a low carbon economy (or even a negative carbon economy) seems close to a technological certainty. But time and security is precisely what climate change endangers. We have been pouring carbon dioxide into the atmosphere since the dawn of the industrial age. Pre-industrial levels were approximately 280 parts per million. We (that is, the global population) are now approaching 395ppm, adding about 2ppm per year (last year we added 2.67ppm, one of the highest jumps on record). Even more disconcerting, our current global climate, which operates between .7 and .9 degrees Celsius above the average, is not representative of our current atmospheric carbon levels. Because the climate system shifts only after substantial time lapses, thermal inertia, global climate is actually a reflection of carbon levels from a few decades past. We will only know what 395ppm means in the 2040s and 2050s... and there is no telling how high that carbon ppm number will go before a low-carbon economy can stabilize the climate. The 2060s and 2070s may be a nightmare scenario of a 4-6 degree temperature rise.

That is why scientists like Thomas Lovejoy speak of the "climate change endgame." They know we will pay for all of this a few decades hence, and the cost will be enormous, perhaps fatal, on a global scale. Even if some societies can bear the cost and adapt, droughts, wildfires, floods, famines, and lack of fresh water—basically all the worst parts of the Bible—will threaten millions if not billions of people. This is not just a humanitarian crisis. If a billion people in India cannot feed themselves and flee toward the borders of Pakistan and China, all three of whom are nuclear powers, then climate change will be the author of the worst geopolitical destabilization in history. That is one of many scenarios in which global security will be threatened.

Enter geoengineering, a catch-all term for large-scale human interventions in the global carbon climate system that may—may—offer humanity the time it needs to reach climate security. Geoengineering has a lot of complications to it, but the first is semantic. Two very different methods of approaching the carbon dioxide crisis have been lumped together under this term: carbon dioxide removal (CDR), which means taking carbon dioxide out of the atmosphere, and solar radiation management (SRM), which involves reflecting more sunlight away from the earth. Two of the scientists most interested in pursuing geoengineering research (research, not necessarily deployment), Ken Caldeira and David Keith, presented the basic ideas of geoengineering and climate risk-management here. In the first half of the linked video (follow and select episode 9), Caldeira breaks down the basic stratagems behind CDR, revealing that removal of carbon dioxide from the atmosphere is a monumental task with no quick or cheap comprehensive solution. By that crieteria, CDR cannot compare with SRM. The distinction in effectiveness between CDR and SRM, as he lays it down (around the 20:00 mark) is really a question of subtraction verses multiplication:

One of the differences between chemistry and physics is that for chemistry, for every molecule of CO2—if you want to remove it from the atmosphere, you have to deal with each molecule. So anything you do has to be on the same scale as the system that releases the CO2. So all of these carbon dioxide removal systems are basically on the same scale as our energy system. I mean, they might be a bit bigger, a bit smaller, but that's sort of the scale of operations. And the difference is that physics—each particle in the atmosphere is a multiplier, and can send back many photons.... What we're talking about [with CDR] is chemistry and there are no silver bullets. There are things that might be cost effective, there are things that might be useful, but there is no magic solution.

In other words, we can try CDR techniques like planting lots of trees—and forestation has all kinds of biodiversity benefits besides sucking carbon out of the air—but trees can't compensate for the millions of tons of carbon dioxide emissions we produce each year. Even really big trees. There are just too many molecules of CO2 up there for us to extract and safely store (the economics of which is dubious regardless) in time to keep the planet from overheating.

SRM, the most viable method of which involves putting small particles of a sulfur compound into the upper atmosphere, works on the physics side of the climate problem. Each particle, so long as it hangs out up there in the sky, reflects sunlight back into space and keeps the earth from heating up. (Carbon dioxide and other greenhouse gases, on the flip side, keep heat from escaping, which causes climate change.) The multiplicative effect of a sulfate aerosol (one particle reflecting many photons) can substantially reduce or even mitigate entirely the effects of carbon dioxide in terms of temperature. Here's a lecture by David Keith explaining the theory and the science behind it:

The first point worth noting comes at the 2:20 mark, when Keith states:

There is nothing we can do for solar geoengineering that gets us out of the long run necessity to cut our emissions to effectively zero. It can help us manage the risk in some ways that might be quite important. It might allow us, whether we think that's a good idea or not, to delay, but it cannot get you out of the need to cut emissions because the compensation at the very best is fundamentally imperfect.

That last part about compensation is an acknowledgment that a climate with lots of CO2 in the atmosphere and lots of sulfur aerosols shading the globe does not equate to a pre-industrial climate. All those irradiating and reflective physics going on in the sky will alter some climate patterns even as it keeps the earth relatively cool. These alterations could have negative consequences. A study by European scientists published in June of last year found in its climate modelling that a uniform SRM program to mitigate warming could cause rainfall to decline by 5% globally, and perhaps substantially more in tropical areas like the Amazon. That's bad. But in October, Keith, Caldeira, and two other scientists, Douglas MacMartin, and Ben Kravitz, published a new study in Nature: Climate Change that demonstrated how non-uniform SRM, "optimizing the latitudinal and seasonal distribution of solar reduction," actually would not have such terrible side effects regarding rainfall. The 5% drops to somewhere around 3%. 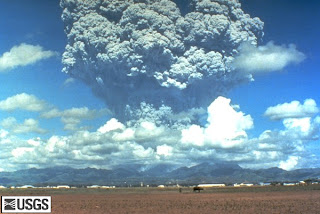 The difference is in uniform versus non-uniform SRM. Instead of firing huge amounts of sulfur into the atmosphere like, say, a volcano, and seeing how the climate cools globally, you might strategically put particles in certain places in different amounts to fine-tune the effects on cooling and precipitation. To the left, Mt. Pinatubo erupted in 1991 cooling global temperatures by .5 degree Celsius for over a year, but also decreasing rainfall in certain areas while increasing it in others. The eastern United States, for instance, experienced flooding the next summer. (I myself remember experiencing an epic rain event at the Newport Folk Festival that summer, although one weather event may have nothing to do with larger climate data.)

The science behind all this is in an early stage, as Keith and Caldeira continually remind their audiences. Their agenda is that, like any new technology or scientific field, it has to be researched. To date, geoengineering has been viewed as a domain of mad science and therefore unworthy of governmental funding and a serious research program. But the cheapness of SRM—Keith explains (around 31:30) that sulfur aerosol SRM would cost around $10 billion per year—means that the debate over geoengineering has massive geopolitical as well as scientific implications. Virtually any nation (and a few individuals) has the financial capacity to attempt this. If China alters the global climate to cool its own territory, but in the process lowers rainfall in India and keeps Russia from achieving ice-free shipping lanes, we have a new kind of international crisis on our hands. If SRM brings benefits to some countries and more problems to others, then the question of control is tremendously significant, as many environmental writers, as well as the scientists, have wondered.

Which means geoengineering might have fewer variables in terms of the science and the engineering than in the realms of politics and international relations. I'll turn to those issues of social science in the next post.
Posted by Unknown at 5:36 PM