If anyone doubts the capacity of human ingenuity to solve problems of global significance, from climate change to immigration to gun violence, then they need look no further for inspiration than Times Square in the heart of the Big Apple this week. Resting there in all its glory is a 23-ton lego model, the largest ever built, of a Star Wars X-wing spaceship. I am flush with emotion... is this how Titus felt when the Roman Colosseum was finished? Or Qin Shi Huang, first Emperor of China, after linking various fortifications into the Great Wall?

To fully appreciate the achievement, take a look at the close-up photographs in this spread by Business Insider. It's easy to be awed by the statistics: the weight, the height, the five-million-plus bricks used. Like all lego kits, the attention to detail is impressive. R2-D2 sits on top in his clever droid socket; the color markings and proportions are spot on; and the S-Foils are not in attack position, which makes sense since we're no longer at war. (Were this a Lego drone, that might be a different matter.) All in all, it's a stunning space-lego achievement, but what makes it timeless is the pilot figure of lego Porkins at the side of the model standing ready to board. 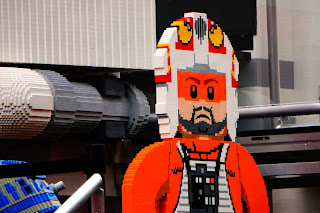 Porkins, you'll remember, was the wingman who covered Biggs in an early attack, failed to heed Biggs's advice to pull up or eject, and got shot down by Death Star guns. In other words, this is a pre-Death-Star-battle X-wing, a lego warning to all of us, perhaps, that dark and difficult challenges lie ahead. Thanks Porkins.

Among the many challenges facing our nation is in fact the continuation of the Star Wars franchise, long the mythic cornerstone of our material creed. Shouldering this burden is none other than J. J. Abrams, the man of plot twists and turns, he who has attempted to breathe new life into the Star Trek universe and must now travel back in time and a few galaxies over to give us all A New Hope, again. There is anxiety he may not be up to the task. The alternative outlook is that there is nowhere to go but up after the catastrophic prequels that George Lucas inflicted upon America and the world. Plus Abrams is already getting sound advice from science fiction giants. Were he to stick with a lego theme—and if we can build a 23 ton lego X-Wing, why not?—he might find Eddie Izzard's Death Star canteen routine, brilliantly represented in lego live action, one source of inspiration:


It's quite funny, but remember Mr. Stephens will die like everyone else in the Death Star. Everyone except Jeff Vader.
Posted by Unknown at 12:15 PM