Though I focused on the problem of state sovereignty in the last post on the Roberts Court, I've been trying to sort through some of the other bizarro rationales that the conservative justices used to make these decisions. I am especially confused about Roberts and his opinion of Congress.

Let's start with Shelby, the Voting Rights Act case. Congress, in a rare display of conscientiousness, undertook an exhaustive review of the voting rights and discrimination patterns in the South before choosing to reauthorize the VRA in 2006. What they found were hundreds of examples of discriminatory practices expressly designed to erode or dilute the political voice of minorities, mainly through voting practices. It seemed pretty logical, then, to re-up the VRA.

In his majority opinion, John Roberts countered all this evidence by citing evidence of the progress made since the law's original passage:


But history did not end in 1965. By the time the Act was reauthorized in 2006, there had been 40 more years of it. In assessing the “current need” for a preclearance system that treats States differently from one another today, that history cannot be ignored. During that time, largely because of the Voting Rights Act, voting tests were abolished, disparities in voter registration and turnout due to race were erased, and African-Americans attained political office in record numbers.

No, history did not end in 1965, but neither did racial discrimination or, more importantly, the evolution of race-based voter discrimination. It seems like the only evidence that would convince Roberts would be replications of modes of voter disfranchisement characteristic of the late Jim Crow era. He's looking around for Bull Connor loosing dogs on black voters and, when he can't find it, he's decided the need for the VRA has ended. That discrimination itself might have changed or become more subtle eludes him. Voting tests and depressing voter registration are not necessarily the methods of choice anymore (although they will be soon enough because of the Court's horrific decision). Nor is Roberts's assurance that "African-Americans [have] attained political office in record numbers" convincing in the slightest. It's easy to set a record when the previous score is zero. A few quick questions to highlight the amazing progress of African-American politicians in the South:
(Answers provided at the end of the post. No cheating.) Back to the question of evidence... Justice Ginsburg takes Roberts to task for his static outlook on discrimination in sections 2 & 3 of her dissent:


True, conditions in the South have impressively improved since passage of the Voting Rights Act. Congress noted this improvement and found that the VRA was the driving force behind it. 2006 Reauthorization §2(b)(1). But Congress also found that voting discrimination had  evolved into subtler second-generation barriers, and that eliminating preclearance would risk loss of the gains that had been made.

Plus covered districts always have the option of appealing for "bail out" under the terms of the VRA, a process in which they prove a history of nondiscriminatory behavior and, upon successful appeal, become exempt from Section 5 preclearance. So the VRA itself accounts for progress in these areas and provides the mechanism for districts to become unburdened of federal oversight.

But the real issue here is that Congress went through all this evidence and Congress decided the evidence was sufficient to reauthorize the act. Roberts himself admits that Congress has the power to pass this legislation, that the VRA is thus Constitutional, if the evidence is sufficient. (This point is lost on the Washington Post conservative editorialist Jennifer Rubin, who compensates for her deep limitations with her great talent for setting up straw men.) His entire opinion is based on his contention that the evidence isn't sufficient. Now if that were true, wouldn't we expect a relatively contentious floor debate in Congress over reauthorization? And wouldn't we expect a relatively close or divided vote, as different members of Congress arrived at different conclusions based on ambiguous evidence?

That was not the case. In the House, the vote was 390 Ayes, 33 Noes, 9 NVs. We can further break this down by looking at the House votes from states most affected by the VRA. If they were unduly burdened, we would expect the majority of them to vote against the bill and, more specifically, we would expect the vast majority of Republicans in those areas to vote against it. Here is the breakdown

So in the states most affected, not only did 43 of 43 Democratic Representatives find the evidence sufficient, but 64 of 84 Republicans (all of them white) did too. As for the 2006 Senate vote on the VRA, that is much easier to parse: it was 98 Ayes, 0 Noes, 2 NVs. John Roberts must believe he has special insight into the same evidence that convinced Congress to overwhelmingly pass a bill he believes is unnecessary.

Alternatively, Roberts simply may not trust that a Congressperson's vote on the record reveals what they secretly wanted to vote for. That, after all, is the thinking of Justice Scalia. I wrote about this in February after the oral arguments were presented before the Court—Scalia said the following:


And this last enactment, not a single vote in the Senate against it. And the House is pretty much the same. Now, I don't think that's attributable to the fact that it is so much clearer now that we need this. I think it is attributable, very likely attributable, to a phenomenon that is called perpetuation of racial entitlement. It's been written about. Whenever a society adopts racial entitlements, it is very difficult to get out of them through the normal political processes.

By this reasoning, members of Congress can't appear to be against African-Americans or minorities because... well, I don't know what would happen. Does Scalia or Roberts think the liberal enforcers of political correctness would magically throw them out of office? Who do they think these politicians are fooling? 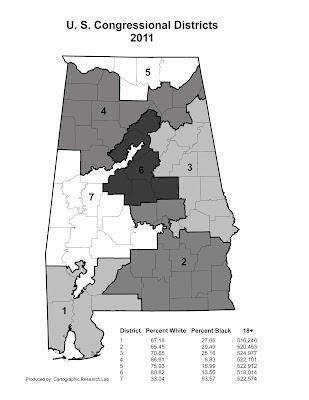 Here, for instance, is a map of Alabama's Congressional districts after the 2010 census. Shelby County is part of the blatantly gerrymandered 6th district located in the middle of the state. Its ridiculous shape and the fact that it is over 80% white, while it borders a district that is 63% black, kind of give the race-based politicking away.

I suppose in a twisted way, this actually comports with the conservative justices' view of Congress in US v. Windsor, the DOMA case. Roberts, just as he ignored the reams of evidence substantiating continued discrimination in the 2006 VRA debates, is happy to ignore all the evidence from the Congressional record
regarding the debate to pass DOMA in 1996. Channeling the logic of Plessy v. Ferguson, Roberts cannot bring himself to admit that a law defining marriage as the sole privilege of heterosexual couples carries with it an implicit condemnation of homosexual marriage, or that the politicians who voted for it explicitly espoused these prejudices.

The majority sees a more sinister motive, pointing out that the Federal Government has generally (though not uniformly) deferred to state definitions of marriage in the past.... That the Federal Government treated this fundamental question differently than it treated variations over consanguinity or minimum age is hardly surprising—and hardly enough to support a conclusion that the“principal purpose,” ante, at 22, of the 342 Representatives and 85 Senators who voted for it, and the President who signed it, was a bare desire to harm. Nor do the snippets of legislative history and the banal title of the Act to which the majority points suffice to make such a showing. At least without some more convincing evidence that the Act’s principal purpose was to codify malice, and that it furthered no legitimate government interests, I would
not tar the political branches with the brush of bigotry.

I also wrote a post about DOMA and anti-gay sentiment after oral arguments were made at the end of March. Some of the "snippets of legislative history" that Roberts dismisses include the Report of the House Judiciary Committee from where the bill originated, which stated:


Civil laws that permit only heterosexual marriage reflect and honor a collective moral judgment about human sexuality. This judgment entails both moral disapproval of homosexuality, and a moral conviction that heterosexuality better comports with traditional (especially Judeo-Christian) morality.

Brushing aside such statements because they are too inconvenient to acknowledge openly, Roberts is more than willing to point to the lopsided vote in favor of DOMA in 1996. It's not as lopsided as the vote for the VRA in 2006, but apparently the vote matters when heterosexual marriage is on the line, not when voting rights for minorities are threatened. And with DOMA, the motives of Congress were above reproach, despite evidence to the contrary. When the VRA was passed, however, Congress could not be trusted to read the evidence correctly, nor vote their real political desire. For a man who champions judicial modesty, I am struggling to make sense of such a capricious regard for the legislative branch that allows him to decide a case in whatever way he wants.


Answers to the earlier questions:

Edited 6/30: Originally the answer supplied for the first question only listed P.B.S. Pinchback. Now corrected to include Douglas Wilder. Thanks to reader JW for the correction.
Posted by Unknown at 2:56 PM