Ross Douthat & The Limits of Libertarian Populism (Part I)

I'm generally a fan of Ross Douthat, or at least I'm as much a fan as one can possibly be of someone whose social politics reside in the Rick Santorum neighborhood. Since the election and before, his columns have been gently nudging the GOP to rethink (or rebrand) its politics and on some issues he has called out Republican hypocrisy. But I've been quite skeptical of his last few columns, which he has spent exploring in greater detail the potential of libertarian populism as a philosophical vehicle to bring about a Republican renaissance.

In his latest column, Douthat compares Obama's Democrats and the current GOP to the "court" and "country" parties of 18th century Britain, so designated by Henry St. John, Viscount Bolingbroke, an oft overlooked conservative writer and purely by coincidence bearer of the same name I plan on giving my dog (should I ever get one). Douthat's point is that Bush and Obama's presidencies were both "a story of consolidation and self-dealing at the top" that has resulted in an elitist government insulated from and unconcerned with the interests of the people. Libertarian populism, then, could prove to be effective against this kind of Leviathan, if the GOP can get its act together:


The problem for conservatives isn’t their critique of this court party and its works. Rather, it’s their failure to understand why many Americans can agree with this critique but still reject the Republican alternative.

They reject it for two reasons. First, while Republicans claim to oppose the ruling class on behalf of the country as a whole, they often seem to be representing an equally narrow set of interest groups — mostly elderly, rural (the G.O.P. is a “country party” in a far too literal sense) and well-off. A party that cuts food stamps while voting for farm subsidies or fixates on upper-bracket tax cuts while wages are stagnating isn’t actually offering a libertarian populist alternative to the court party’s corrupt bargains. It’s just offering a different, more Republican-friendly set of buy-offs.

Second, as much as Americans may distrust a cronyist liberalism, they prefer it to a conservatism that doesn’t seem interested in governing at all. This explains why Republicans could win the battle for public opinion on President Obama’s first-term agenda without persuading the public to actually vote him out of office. The sense that Obama was at least trying to solve problems, whereas the right offered only opposition, was powerful enough to overcome disappointment with the actual results.

Both of these problems dog the right’s populists today. There might indeed be a “libertarian populist” agenda that could help Republicans woo the middle class — but not if, as in Rand Paul’s budget proposals, its centerpiece is just another sweeping tax cut for the rich.

There's a lot of good sense in this diagnosis of the right's agenda problem, but I can think of a few criticisms that cause me to question Douthat's prescriptions. The first (and I'll tackle others in upcoming posts) is the notion that the GOP would be much more popular, and therefore successful, if they tried to govern productively. This hypothesis rests on the premise that Obama's agenda is unmoored from the priorities of the American people. Douthat calls it the "Great Disconnect":


This January, as President Obama began his second term, the Pew Research Center asked Americans to list their policy priorities for 2013. Huge majorities cited jobs and the economy; sizable majorities cited health care costs and entitlement reform; more modest majorities cited fighting poverty and reforming the tax code. Down at the bottom of the list, with less than 40 percent support in each case, were gun control, immigration and climate change.

My problem is that this is a static indictment—it supposes a major Republican shift without considering a Democratic response. What if the GOP in Congress suddenly decided to negotiate in good faith on a jobs program, health care, poverty alleviation, or tax code reform? Does Douthat believe that Obama would ignore them while reflexively issuing executive orders on border security and carbon taxes? Clearly not... if realistic compromises were possible (and such compromises are obviously the prerequisite for national governance), then Obama would be cutting these deals with the Republicans, just like Reagan did with a Democratic Congress. If Douthat wants to presume a political opportunity for a GOP that actually attempts to govern, then he must also presume the political upside for a president who would sign those compromises into law. In fact, the more the political middle ground becomes available for constructive work, the less incentive Obama would have to pursue left wing causes like gun control or climate change.

And let's take a closer look at those left wing causes that Douthat dismisses, I think, all too quickly:

The president decided to make gun control legislation a major second-term priority ... with firearm homicides at a 30-year low. Congress is pursuing a sharp increase in low-skilled immigration ... when the foreign-born share of the American population is already headed for historical highs. The administration is drawing up major new carbon regulations ... when actual existing global warming has been well below projections for 15 years and counting.

The shot at climate change here is silly. The very article Douthat links to, Nate Cohn's piece for The New Republic, establishes (like every other piece of responsible reporting on climate change) that "the greenhouse effect is truly undeniable" and ends with this:


The last decade is proof of climate change, not a cause for reflexive skepticism. It was the warmest on record, despite a laundry-list of mitigating factors like prolonged La Nina, a wave of modest volcanic eruptions, and an ebb in solar activity. As those attenuating factors subside, climate scientists anticipate another round of rapid warming.

In other words, the conclusion of Cohn's article is exactly the opposite conclusion that Douthat implies in his column. (Besides climate change is a threat to national security. Awaiting popular consensus before acting on that issue would be folly.)

Douthat's complaint about immigration makes sense only if you care about not exceeding "historical highs" in the foreign-born population. Considering his earlier, rather icky demand for "more babies, please," which an uptick in the immigrant population would contribute to, this is a strange protestation. Moreover, when asked specifically about this issue, the majority of the country supports immigration reform that includes a path to citizenship, the most progressive measure in the Senate bill.

Finally, gun control. Douthat is right that gun homicide rates are at an all-time low, but this point is decontextualized. The Economist reported last week that crime rates across the board have dropped since the 1990s, and have done so throughout the West, not just in America. (They ignore some of the more creative explanations for this drop, but it's a worthwhile leader.) Where America continues to stand out, however, is precisely on the problem of gun homicides. After Sandy Hook, Business Insider published some illustrative charts about gun violence put together by Mark Reid of Australian National University, and this one tells it all: 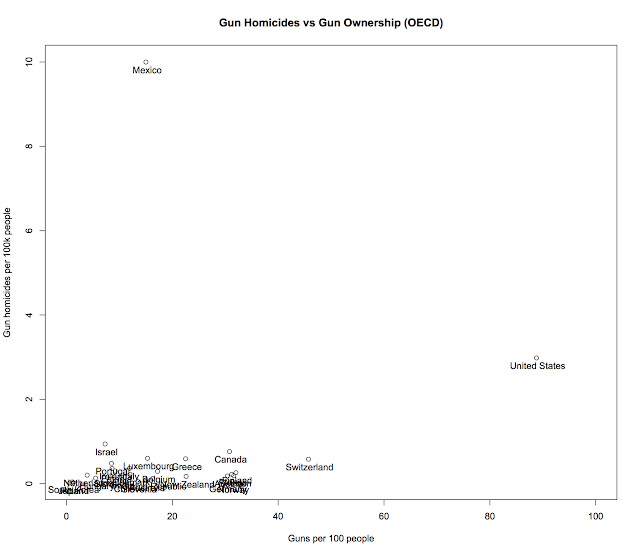 In sum, these are all serious problems which require responsible governance and I'm happy to have a "court party" taking on such issues. But my own politics aside, I don't think it is clear that Obama is addressing them in a particularly left-wing manner. His policies may infuriate coal barons, Glenn Beck, and the NRA, but that does not mean he has left the political center open and the inverse of these politics sets that into relief. Keeping coal plants open for business, refusing a chance for citizenship to a lot of non-white people, and killing common-sense background checks on firearms is the politics of the far right, not the center. And if the GOP were amenable to better governing on major voter priorities, could we not also speculate that they might find compromises on these three issues more palatable as well? I mean, as long as we're wishing for pigs with wings, we might as well imagine they can use those wings to fly.

Put another way, it is difficult to see that a middle-class populist insurgency would find the kind of open water that Douthat suggests is out there.
Posted by Unknown at 10:44 PM