Returning home from a vacation can be a wonderful feeling, especially after suffering the seemingly interminable horrors of domestic air travel. Even so, the first day at home is full of challenges, exhaustion, all that laundry to do, a vastly depleted supply of Honey Nut Cheerios. In my experience the right music can really help set the tone for first day back. Sure it's tempting to put on something soothing, but you run the risk of giving in to jet lag and taking that nap on the sofa too soon. That's when you wake up 14 hours later with sleep-induced neck trauma and all your clothes still unwashed. The music has to keep you going while easing you back into the routine of home. It's the groove that matters.

Naturally there are plenty of good options. Springsteen is never a bad idea. Nor is some uptempo jazz. But, with groove in mind, my recommendation this week is Van Lear Rose, the collaborative work of country legend Loretta Lynn and rock auteur Jack White. Everyone praised this album when it was released in 2004. New York compared it to Johnny Cash's best work. Rolling Stone wrote "Loretta Lynn hasn't made an album this rich since her 1977 concept tribute to Cline, I Remember Patsy — an album recorded when Jack White was two years old." Hell, the Wall St. Journal loved it. 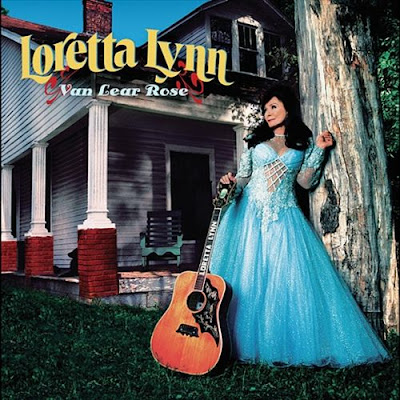 And what's not to love? White's mad scientist production skills and guitar work stretch Lynn's songs in every direction from Lynn's Appalachia to his own Detroit rock roots, but by some miracle of musical alchemy the album is all country. There's hard drinking, love lost, one night stands, disfigured children, cheap floozies, pink limousines, righteous women, infidelity, prison, and God. If there was ever an antidote for vacation, this is it. If you're looking to rock out, "Portland Oregon" is the answer; if the blues is on your mind, then it's "Have Mercy"; "God Makes No Mistakes" is the dark side of country; and my personal favorite, the artfully opaque spoken-word reminiscence of Lynn's childhood, "Little Red Shoes."

Remember... sloe gin fizz works mighty fast when you drink it by the pitcher and not by the glass.
Posted by Unknown at 2:56 PM