It is becoming more and more common to read articles about the current political crisis and find comparisons to the Civil War. Tom Edsall for the New York Times began his most recent column with this:


These are extraordinary times. The depth and strength of voters’ conviction that their opponents are determined to destroy their way of life has rarely been matched, perhaps only by the mood of the South in the years leading up to the Civil War.

In a Salon interview with left leaning economist Doug Henwood, the question of whether a stock market crisis would finally compel the Republicans to capitulate was raised. Henwood responded:


It does seem like this group of really hardcore Tea Party types may not really be impressed. They seem to believe that the cause of justice is on their side, and that they are making some sort of glorious last stand or avenging the surrender of the South in 1865 or something. They may not listen.

Plenty of signs ominously point to Henwood's speculation proving true. Republicans may not capitulate despite all the warning signs, not only to the economy but to the interests of their own party. In an eerily familiar replaying of the 2012 election, the right wing seems determined to interpret falling poll numbers as winning poll numbers. California Republican Tom McClintock took just this rosy view of the situation saying, "Actually the polling that I've seen is showing a rising body of opinion that rejects the no-compromise, no-negotiation stance of Harry Reid and Barack Obama."

Perhaps McClintock has access to in-house polling that shows something different from national polls, because nothing in national polls suggests good news for Republicans. Sam Wang, the statistician and analyst behind the Princeton Election Consortium, yesterday published a post arguing that, based on a recent set of PPP polls, the GOP majority was in jeopardy. (Wang is not irresponsible; he offers numerous caveats in his post, not least that the election is a year away, but the takeaway is that the politics of the shutdown are seriously hurting the Republicans.) PPP surveyed 24 GOP-held Congressional districts. Wang interprets the results (and references a graph on his blog) as follows:


The swing was toward Democrats for 23 races (below the red diagonal) and toward the Republican for 1 race (above the diagonal). The key piece of information is the gray zone. If more than half the points are in that gray zone, then that predicts a swing of >6% and a Democratic takeover. Currently, 17 out of 24 points are in the gray zone.

This sort of bad news is exactly why a few conservative pundits are questioning the wisdom of this GOP-born catastrophe. In The New York Post, John Podhoretz authored a column entitled "Suicide of the Right," which notes some uncomfortable truths: that Obamacare is unpopular but not overwhelmingly so; that "the US Congress is viewed favorably by... 11 percent of Americans"; and that "Republicans look considerably worse" in this showdown. These facts are not lost on Obama, who has been getting increasingly sharp as the crisis has escalated. (It's a guess, but I am 99% certain people in the White House were reading Sam Wang's post after it was published—Wang is as highly regarded (or moreso) as Nate Silver.)

But these same facts don't matter to hardliner Tea Partiers. Greg Sargent's morning post crystallized the current crisis as a problem not of negotiation over the debt, because both Democrats, including Obama, and Republicans have already said they want to negotiate, but under what circumstances such negotiations ought to take place. Right wing extremists who seem to be running the GOP only want to negotiate in a crisis atmosphere, because that gives them the only leverage they have with Obama. We know this because the GOP refused to negotiate earlier this year when the Senate passed a budget, and they are refusing Obama's offer to negotiate after opening the government and raising the debt ceiling.

In other words, John Boehner has watched as a radical wing of his own party has manufactured a crisis, escalated it, and forced him to extract as much political influence out of it as possible. Now there is a good chance his Speakership will be consumed by it. He is living out his own little French Revolution and the Committee of Public Safety will come for him sooner or later. As Tom Edsall noted,


John Boehner is just the kind of Republican leader the hard right dislikes – a deal maker, a compromiser. The Republican primary electorate, with its hold on a solid block of Republican representatives and its ability to recruit and promote challengers, now has Boehner trapped.

All of which begs the question, what can a normal Republican do under such circumstances? On this question, I think the period of the Civil War offers an illuminating parallel. In the 1850s, the strain of ideological politics was too great for the party system. The Whigs crumbled by the middle of the decade. The Democrats survived, but split into sectional factions in 1860, which (arguably) set the table for Lincoln's electoral victory. At the 1860 Democratic Convention in Charleston, South Carolina, the delegates could not agree on the issue of slavery in the territories. Some die-hard Southerners demanded a plank endorsing the Dred Scott decision. Stephen Douglas, the odds-on favorite to win the nomination, had built his career on the policy of "popular sovereignty," which he had last defended in his 1858 debate with Abraham Lincoln at Freeport. He and his supporters refused such a plank. The Southerners, called "Fire-Eaters" for their belligerent extremism, (a moniker far more appropriate to the current right-wing of the GOP than "Tea Partiers"), walked out of the convention. Weeks later, most Democrats reconvened in Baltimore to nominate Douglas. The Southerners met separately in Baltimore and elected John C. Breckinridge. Here's what Douglas's home town newspaper had to say about it: 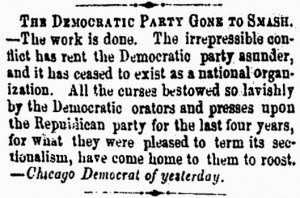 The modern GOP seems headed for just such a split. Consider what Podhoretz had to say towards the end of his column about the far right of the GOP:

They’re right not to assign special glory or power to a political organization and to hold ideas above party. But here’s the condundrum: There is only one electoral vehicle for conservative ideas in the United States — the Republican Party

Exactly, there's only one electoral vehicle... at the moment. But it may prove to be that the bonds holding the Republican Party together will break, if not in this crisis than in the next crisis they create. I used to think the Tea Party might break off from the GOP and form their own right wing party. Now I don't think so... why would they? They have already demonstrated their superb ability to control the GOP as it currently exists. Now it seems more likely that moderate Republicans would split and form their own independent or center-right party. Harold Meyerson suggests just such a possibility in the Washington Post. The major threat all moderate Republicans fear at the moment is getting primaried. Filing as an Independent could go a long way to erasing that threat.
Posted by Unknown at 2:43 PM