About six weeks ago, President Obama made a speech about income inequality in which he made the following claim:

The combined trends of increased inequality and decreasing mobility pose a fundamental threat to the American Dream, our way of life, and what we stand for around the globe.

Since then columnists across the spectrum have been investigating the problem of income inequality with, unsurprisingly, a great variety of prescriptions. It has been a demonstration that the presidency can be, at the very least, a generator of national debate.

The latest to weigh in is New York Times columnist David Brooks, whose editorial misdemeanors have been a subject of this blog in the past. Brooks offers four salient points to make his case against raising the minimum wage as a mechanism to alleviate inequality. Let's take them one by one (in each quotation, emphasis his):

In the first place, to frame the issue as income inequality is to lump together different issues that are not especially related. What we call “inequality” is caused by two different constellations of problems.

If you have a primitive zero-sum mentality then you assume growing affluence for the rich must somehow be causing the immobility of the poor, but, in reality, the two sets of problems are different, and it does no good to lump them together and call them “inequality.”

This might be true if the economy were growing at the kind of pace it was in the mid-20th century. With substantial growth, the rich could become more affluent and the classes below them could also reap some of the profits. If, as in the US over the past twelve years, there is anemic economic growth and the wealth is going to the top 1%, or more accurately the top tenth of 1%, then there is little generated wealth for everyone else. It is, in fact, a sum. We can actually add up the wealth and then see who's getting it.

Causation is a trickier issue. Brooks is on somewhat safer ground when he objects to a causal relationship between growing wealth at the top and immobility at the bottom, but it's still a pretty dicey argument. If we had a sound regulatory system in place along with a more progressive tax code and a stronger social safety net, then the profits the affluent brought in would get funneled into programs we know alleviate immobility: education systems, transportation and infrastructure, unemployment insurance, and a higher minimum wage. But largely because the Republican Party has staunchly opposed them, we haven't implemented these policies.

In a political economy in which the wealthiest take the lion's share of all the new wealth generated, and the political party that represents their interests continually obstructs any measures taken to redirect that wealth toward the rest of society, it is hard not to conclude that the immobility of the poorest is caused, at least in part, by the growing affluence of the rich.


Second, it leads to ineffective policy responses. If you think the problem is “income inequality,” then the natural response is to increase incomes at the bottom, by raising the minimum wage.

But raising the minimum wage may not be an effective way to help those least well-off. Joseph J. Sabia of San Diego State University and Richard V. Burkhauser of Cornell looked at the effects of increases in the minimum wage between 2003 and 2007. Consistent with some other studies, they find no evidence that such raises had any effect on the poverty rates.

This is close to intellectual dishonesty. When Brooks assures us that this study is "consistent with some other studies," the vagueness itself should raise suspicion. Indeed a host of comments from his readership pointed out that Brooks pointedly ignored data from other surveys that arrived at the opposite conclusion. Economist Arindrajit Dube, currently at MIT, surveyed all of the data from a variety of different studies, including the one Brooks cites in a vacuum, and came to this conclusion:


When I consider the set of nearly all available estimates of the effect of minimum wages on poverty, the weight of the evidence suggests that minimum wages tend to have a small to moderate sized impact in reducing poverty.

He then lists all his favorite social ills that represent, as he puts it, "the fraying of social fabric": single motherhood, high school dropout rates, de-industrialization, and (more mysteriously) the ill-chosen behaviors of young men. Each, he notes, has a "strong correlation with low social mobility." Then Brooks postulates, with no evidence offered, that "Low income is the outcome of these interrelated problems, but it is not the problem. To say it is the problem is to confuse cause and effect." It is unclear how Brooks moves from his own language of "strong correlation" to his unsubstantiated certainty that behavioral problems and poor social choices (for lack of a better term) cause low income. That seems just as simplistic a reduction of complex problems of which he accuses others. Paul Krugman responded (without calling out Brooks directly) in his own recent column on inequality:


Even on its own terms, it postulates opportunities that don’t exist. For example, how are children of the poor, or even the working class, supposed to get a good education in an era of declining support for and sharply rising tuition at public universities? Even social indicators like family stability are, to an important extent, economic phenomena: nothing takes a toll on family values like lack of employment opportunities.

America has "always done better" when we haven't focused on inequality? That is an extraordinary statement to make four days prior to Martin Luther King Day. Does Brooks have an even passing familiarity with the history of class politics or the rise of class consciousness in America? Between 1870 and 1940, America suffered from calamitous inequality, intractable social immobility, a corrupt political system beholden to business interests, a Supreme Court that favored corporations over individuals at virtually every opportunity, and class conflict in which the policing power of the federal government was brought to bear against laborers in defense of wealthy capitalists at every opportunity. Then, as now, class consciousness and drastic wealth inequality were the presiding issues. Here's a quick glance at the historical trends from 1916 onward illustrating income among the top tenth of 1%: 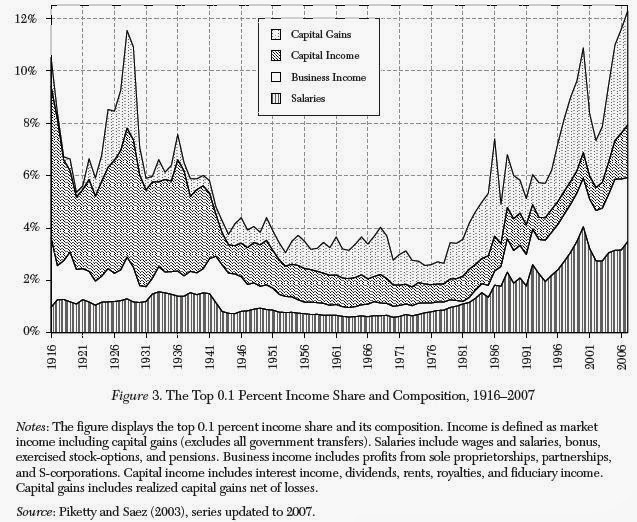 Class consciousness has historically been generated under conditions of stark inequality and the failure of government to respond to the needs of labor. This is almost a self-evident point... but apparently it eludes Brooks, who wants everyone to use the happier vocabulary of "opportunity and mobility." One wonders if he would have told SNCC in 1960 to stop using the incendiary language of race politics and instead celebrate the "new birth of freedom" Lincoln promised everyone at Gettysburg a century earlier. "America has always done better," he might say, "when we have focused on dead white soldiers rather than our national problems with race relations."

To further illustrate Brooks's detachment from history, consider Teddy Roosevelt's direct engagement in class politics with this line from his 1906 State of the Union Address:


The National Government has long derived its chief revenue from a tariff on imports and from an internal or excise tax. In addition to these there is every reason why, when next our system of taxation is revised, the National Government should impose a graduated inheritance tax, and, if possible, a graduated income tax. The man of great wealth owes a peculiar obligation to the State, because he derives special advantages from the mere existence of government. Not only should he recognize this obligation in the way he leads his daily life and in the way he earns and spends his money, but it should also be recognized by the way in which he pays for the protection the State gives him.

And then there was FDR, who gave this, even more confrontational speech in Gainesville, Georgia in 1938:

Today, national progress and national prosperity are being held back chiefly because of selfishness on the part of a few.

You know their reasoning. They say that in the competition of life for the good things of life; "Some are successful because they have better brains or are more efficient; the wise, the swift and' the strong are able to outstrip their fellowmen. That is nature itself, and it is just too bad if some get left behind."

It is that attitude which leads such people to give little thought to the one-third of our population which I have described as being ill-fed, ill-clad and ill-housed. They say, "I am not my brother's keeper"—and they "pass by on the other side." Most of them are honest people. Most of them consider themselves excellent citizens.

But this nation will never permanently get on the road to recovery if we leave the methods and the processes of recovery to those who owned the Government of the United States from 1921 to 1933.

When Brooks claims that such class based language "needlessly polarizes the debate," he seems to be arguing that our political language, not economic conditions themselves, has radicalized the argument. Why should we believe that? The Roosevelt presidents were hardly radicals. They began utilizing a political vocabulary indebted to class consciousness because economic conditions and their constituents demanded it. That is lost on Brooks. While offering only the solution that poor people should find full time work and behave themselves better, Brooks would feel much better if they and their political allies would stop with all the upsetting complaints and demanding a higher minimum wage.

Luckily there are far more compelling and less offensive public intellectuals. There are plenty of people for whom the minimum wage does not seem like a panacea (and rightly so... much more needs to be done alongside raising the minimum wage.) And there are a few conservatives who have suggestions worthy of actual debate. Josh Barro at Business Insider came up with these eight ideas for "a new supply-side economics." Reihan Salam, one of the few voices worth paying attention to at The National Review, has a much more substantial argument to make about the problem in linking poverty to income inequality. Salam wrote an even more interesting piece for Reuters on the local economies of Salt Lake City, Seattle, and Pittsburgh where, despite tremendous income inequality, social mobility matches rates in Scandinavian countries like Denmark and Norway (the gold standard for mobility advocates).
Posted by Unknown at 8:56 PM